“I Just Wanted To Tell You You Look Pretty Today”: How I Flirted for the First Time

Yesterday, I told a girl she was pretty.

This may not seem like a big deal, but it was for me. Ever since I came out as bisexual, I’ve worried about dating. I never dated in high school, because I was a

late bloomer when it came to a “sexual awakening.” People in eighth grade were obsessed with boys, and I just didn’t get it at all. Then I went to an all-girls high school, so boyfriends were distant. I often forgot that dating was a thing that people did, that there was a real reason we had the sex talk (albeit the un-informational Catholic version) in class.

But last year, my freshman year of college, I came out as bisexual because I finally felt ready for a romantic relationship. Yet here I am, one year later, still single. My main problem is that I haven’t tried too hard. I’m a romantic, but only in my head. I’m pretty oblivious when other people are flirting with me, and I am usually too anxious to initiate the flirting. Yesterday, however, I ignored the anxiety and tried my hat at it.

I was emotionally drained from shopping and dinner with some friends, and all I wanted was to spend the night finishing up some work I’d been avoiding. Or at least reading for fun. Then my friend texted me and asked if I would go to a 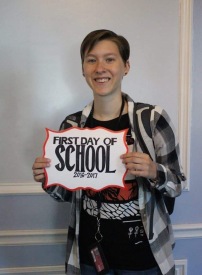 Me on my first day of college classes

Spring Fling Dance with her. Because one of my goals for this year has been to be more social, I said yes. I showered to get rid of the sweat from the strangely warm weather, threw on a semi-nice outfit, and entered the fray of anawkwardly under-attended Honors Program dance.

At first, my friend and I stood by the food, eating popcorn (me) and M&Ms (her). I even drank some Sprite, and I rarely ever drink carbonated beverages. Then a song we all knew came on—who can say no to the “Cupid Shuffle” when in a group?—and more people flooded the middle of the room, including my friend and me. After a few more songs during which I began to feel a little bored, the girl walked in. I swear it was like a movie. Everyone stopped and started clapping when she entered with her friend. I knew they were clapping for her friend, but I was clapping for her. She was beautiful.

Turning to my friend, I hid my face (which I’m sure was extremely flushed) and gushed about how wonderful the girl looked. I was trying very hard not to be creepy, but it seemed that my eyes were pulled toward her the rest of the night. She smiled radiantly, she moved her hips fluidly when she danced, and she laughed with a carefree attitude. Every time we made eye contact across the circle of dancers, we both grinned. I kept thinking, “Is she flirting back? Or is she just a friendly girl?” 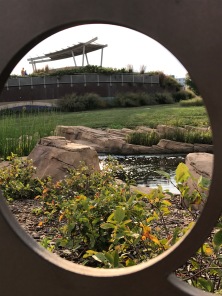 A picture of spring-y weather, cuz I have no pics from yesterday…

And then after “the wobble,” my friend encouraged me to go tell the girl she was cute. My friend said to me, “It doesn’t matter if you never see her again. Go tell her she’s cute.” The first time she shoved me over, I walked right past the girl and out the door, pretending to go to the bathroom. I danced for one more song, unable to walk out during Taylor Swift’s “Shake It Off.”

T Swizzle gave me strength, and the dance was going to end soon. This was my last chance.

I took a deep breath and walked over to her, even though she was in her circle of friends. She was smiling and half-dancing to a weird song nobody knew. I touched her arm and faced the full force of her beauty. I leaned forward and said, “I’m about to leave, but I just wanted to tell you you look very pretty today.” My chest felt tight as I waited for a response.

And then, like the awkward idiot I can be, I said thanks and walked away.

I am still kicking myself for not asking for her number, but I’m also proud. I overcame a huge hurdle by telling her she was pretty. Dating seems slightly less daunting now that I know I really can show someone I’m interested, and they can also be interested in me. The whole idea of flirting with a woman has always

Brendon Urie, my bisexual icon and another beautiful human, for your viewing pleasure

Here’s the thing I realized yesterday: none of that matters. I didn’t expect to get arelationship out of this, and I didn’t expect to get as good of a response as I got. All I wanted was to tell her she was beautiful, because it would be a tragedy if she didn’t know. Taking away all of that pressure made it so much easier to just get over there and say it.

Hopefully, my confidence will continue to increase. Gaining more comfort around others won’t be easy, especially when I’m worried about judgment, but it will be worth it. And maybe someday soon, I’ll be walking down the street holding someone’s hand, or making out with them on my futon (sorry, Mom!). Maybe I’ll be loved in a way that I’ve never been loved before.

Update: I saw the pretty girl in the dining hall today and promptly walked the other direction. So maybe I’m not ready for a relationship yet, but that’s still okay. I’ll get there.