A Hospital, Twenty One Pilots, and a Fish’s Death: How Sadness Has Become Less Negative for Me

About halfway through November, I finally visited a friend who had been in the hospital for months. My excuse for not going was that no one had invited me and I 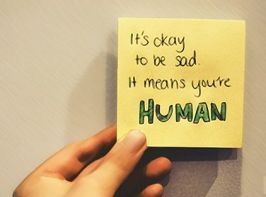 would figure out my friends had visited her after the fact. But I could have asked to be let in on the plans. I could have gone on my own. Really, the idea of visiting her in the hospital made me nervous, because, though I knew that my friend has a chronic illness, it was still hard to believe that she could be suffering so much.

Well, my friend then got moved to a city three hours away (as opposed to one), and it was this move that finally urged me to take initiative and visit her. I had just started becoming friends with her during the previous school year, and I missed her humor and her love of Twenty One Pilots and her passions for music and school. I made plans to go on a road trip with one of my roommates and her friend.

The day of the road trip came, and it turned out that I would be going with my roommate’s friend who I did not know very well. Of course, as with any new social situation, my anxiety skyrocketed. Three hours in the car with someone I barely know? That was going to be tough.

But it wasn’t. The person who drove me was extremely nice and, like me, doesn’t think silence is awkward. Once we had parked and walked swiftly through the cold air to the hospital’s main building, I was forced once again to interact with my 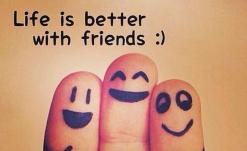 emotions. I met my friend’s parents for the first time, and when we went into her hospital room, it was dark and she was in so much pain she could barely speak to us. So the driver and I sat in two chairs (mine being the more uncomfortable of the two) and spent time with my friend, through the times when she was the good old funny girl I came to be friends with and through the rough moments during which she was in so much pain we just sat in silence with soft music playing in the background.

I barely ate anything all day, and my dinner of snack foods was still tough to force down. It was a hard day, but I was so glad I went, even though it had made me sad. Because sadness wasn’t all I felt. I felt proud to be the friend of such a strong girl, glad that I got to finally hang out with my friend, and grateful to have someone like her in my life. By and large, the sadness was the main emotion that stuck with me, 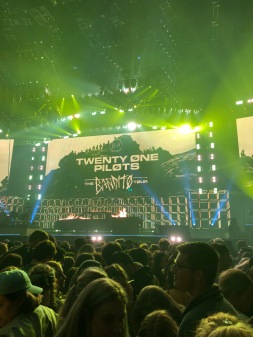 and even after getting back at two in the morning and barely sleeping, I tried not to let myself feel it. As we all know, that never works for long.

A few days later, Twenty One Pilots came to my city, and it was a concert I had planned to go to with my friend in the hospital. She had bought us general admissions tickets, and she really wanted to be able to go, because the last time she wanted to see TOP, she was also in the hospital. She transferred my ticket to my account, but kept her own just to stay hopeful.

I went back and forth while deciding if I should go to the concert alone. It was down to whether I would listen to my anxiety telling me that it would be awkward and claustrophobic to be in the pit alone, or my love for my friend telling me that I should go and film her favorite songs and enjoy myself like she wanted me to. I listened to the latter, and I am so glad I did.

I’m not going to lie: being in the pit alone was extremely claustrophobic. But because I had a purpose, because I was there for my friend, I was able to endure the anxiety 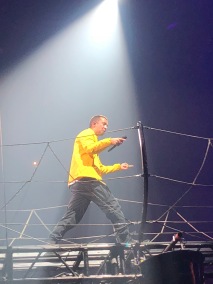 and the disappointment that she couldn’t be there with me. I normally don’t take my phone out during concerts, but I took pics and filmed songs for her, and I jammed out just like I would have with a friend. It obviously would have been better to be with my friend, but the sadness and anxiety for once did not prevent me from having a good time. Tricia reminded me that in Trench I’m not alone.

These first two experiences gave me time to deal with the sadness of seeing someone you love suffer and with being alone in a place you would rather not be alone. And pushing through these to see my friend smile and to send her videos that I knew she would love was so, so worth it.

But there’s a third type of sadness this past month has brought me: grief. I woke up one morning after Chester, my lovely better fish, hadn’t been moving much to find him floating in his tank, dead. I sobbed. And I called my mom. And my roommate gave me a hug. And I flushed him down the toilet with a heavy heart. Even though Chester was “just a fish,” I was heartbroken. I love and get attached so easily, and even though he had only been my desk buddy for a few months, I felt like Chester 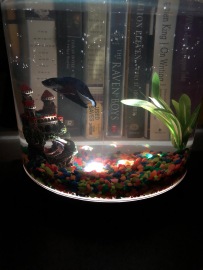 had been with me forever. He gave me a reason to get up on days that I didn’t feel like it, because he relied on me. For someone like me, it’s helpful to have someone else to take care of on those days you feel like you don’t belong in your friend group or family. Chester accepted all of me, and he was a funny guy with a picky appetite. I will miss him, and he was the best fish I’ll ever have.

After this loss, the last couple of weeks of the semester were rough. When I get bored, my default mood is sadness, and this was especially true after the loss of my fish. I faced this intense boredom while all of my friends were stressed about taking their finals. My last paper was due during dead week, so I had a whole extra week of doing nothing before I went home. I had planned some things for myself to do and get done, but because I tend to be efficient with my time management, I finished these all pretty fast and ended up just watching Jane the Virgin on Netflix or catching up on the Avengers movies I haven’t seen yet. I was SO BORED, and I felt alone because my friends were busy and Chester was gone. Because I was bored, I was not motivated to get out my apartment and do things. I sat around with no purpose and my mind defaulted back into sadness.

Guess how I solved this problem? I planned events with friends, wrote some of my novel, and went home early. This type of sadness is the only of the four that I could solve. It is the only kind that I do not just have to sit through and endure. I took my

time in cleaning Chester’s old tank and decorations, letting myself go through the grief as slowly as I needed to.

This past month has taught me that sadness is not a “negative” or “bad” emotion. During and after the TOP concert, I let myself sit with the sadness without trying to distract myself. When Chester died, I allowed myself tears even though I knew others would think I was overreacting. I journaled and listened to sad music and let myself feel without wallowing. This is a happy medium (or sad medium?) that I have never mastered, and probably still haven’t mastered. But I finally understand what people mean when they say the full range of human emotions is beautiful. Because it is. I’m not trying to glorify sadness or sickness or boredom or grief; I’m just trying to accept them as part of my human experience. And I think I’m one step closer to doing this. 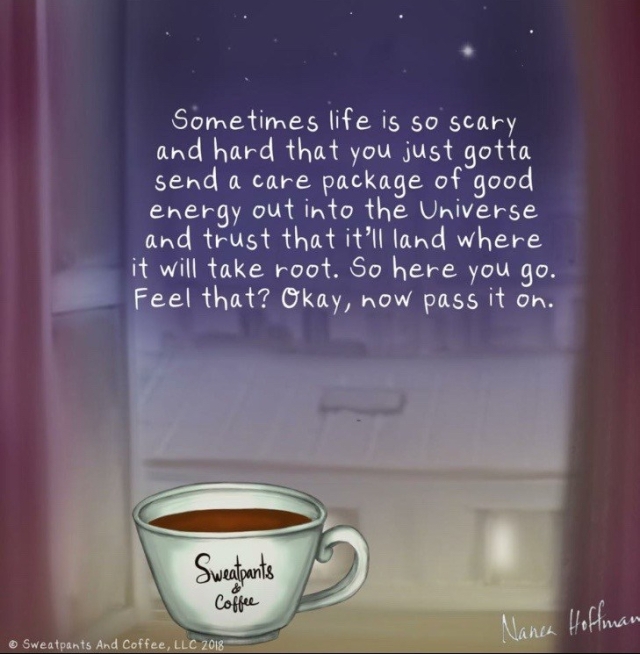