Mixed Media and Turning the Page: How I’m Learning to Deal with (and Embrace) Uncomfortable Situations

A photo I ended up not using for my photo class

The spring semester has been over for what feels like ages, but I can’t stop thinking about my photography class. I spent the entire semester complaining about how I wasn’t good at photography, how I had to try really hard, put myself in uncomfortable situations, and just follow my creativity even though I was constantly uncertain about my photos. My teacher seemed unorganized, the schedule was constantly changing, and I didn’t know anyone in my class super well. Basically, this class was a nightmare for me and a dream for the Hydra monster. My anxiety was so high surrounding this class, but you know what I’ve realized, after ending the class? I actually enjoyed it.

Now, my parents (who got the brunt of my complaining and panic about this class) are probably rolling their eyes. Ryn, why are you pretending you enjoyed that class? Well, besides the fact that hindsight is 20/20, there are lots of reasons.

After the last class of the semester, I felt weird walking out of class knowing I probably wouldn’t interact with this people so often ever again. I’d made some good friends—people like me, people different than me, people who were better at photography, people

Yes, I know someone who looks like this man

who grew on me, and one guy who looked like Matty Healy from The 1975.

My teacher, even though he was pretty disorganized, became one of my favorite teachers. Not because he was amazing at being an instructor, but because he actually cared about his students’ progression as photographers at their own speed and was honest with me. So many times, during our one-on-one meetings, I would say, “I don’t really know what I’m doing. I’m just floundering through this project,” and he would respond, “Well, we all are.” And that was a big eye opener. As a creative person with lots of insecurities, I always assumed other people knew exactly what they were doing while they created things, while I just kind of go with my whims. It turns out I’m not alone. The discomfort and uncertainty I felt all semester is just a part of the creative process; and now I can embrace that uncertainty while writing or pursuing other creative tasks, which will make the process so much more enjoyable.

Nearing the end of the class, I became confident enough to think outside of the box for my final project. This is something I rarely do, even in writing classes. I am a rule follower, through and through, even if no one really cares if I follow the rules. But when I introduced the idea of taking black and white photos, and then painting on them, my teacher encouraged me to try it out. He seemed to be excited about the prospect of having someone do mixed media, which encouraged me even though I had no idea what I was doing. I hadn’t painted anything in years, and I’d never tried to paint in a way that complimented a photo. 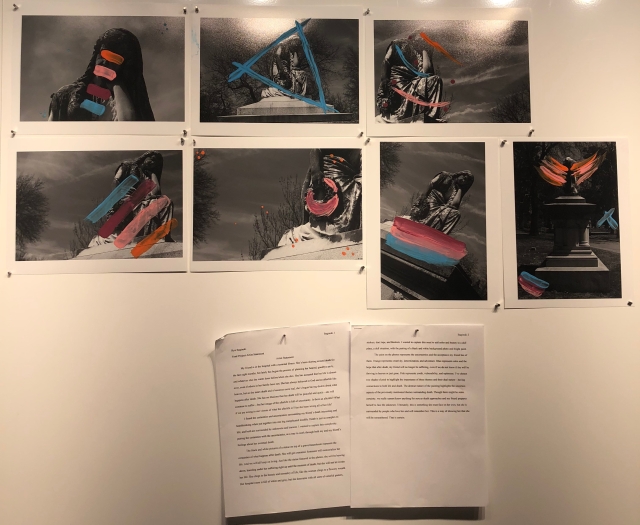 And you know what? Painting on photos is actually super fun. I might do it again. It was cathartic in a way that editing on a screen isn’t. It feels more human, more flawed, more open to error. I loved that about it. I know, right? Who are they? Ryn Baginski, enjoying the flaws of their art? That’s not the biggest shocker, though.

I was most surprised by the fact that I wasn’t too nervous about presenting this project. I was confident in what I created. I was proud of my final project, what it meant to me, and how people discussed it. And critiques are usually my least favorite (albeit the most helpful) part of artsy classes.

Now that I’ve cut down another head of the Hydra monster—and it has stayed dead, for now—I can look forward to a lot of things that would have previously made me too anxious to be excited about. Anxiety and excitement don’t have to be mutually exclusive. In fact, they often come as a package deal.

In the effort to see the positives of these situations, I started a gratitude journal. I’m not super good at it, and I forget to write stuff most days, but on the days that I pause and remember the good, I feel so much calmer. It shows me that I can face uncertainty and anxiety without negating any of the good times.

If I knew everything that was going to happen in a novel I was reading, I probably wouldn’t be as excited to read it. If there weren’t any emotional or uncomfortable moments in said novel, I probably would think it fell flat. The same goes for life. I don’t want my life to fall flat. I want to keep turning the pages, excited for what comes next, even if my chest feels tight and my brain won’t shut up.